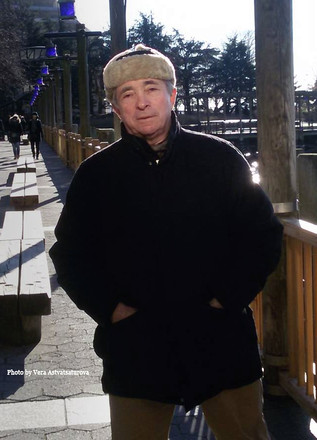 Mark Serman was born in Leningrad, USSR, in 1946. After graduating with a Master's Degree in Oriental Studies from Leningrad State University, he worked as a second unit Director of Photography (DP) at Lenfilm Studio, a place of work for many renowned filmmakers. He also worked on his still photography, perfecting and polishing his skills and expanding his portfolio of work that by 1976 included a very significant project - “The Roofs of St. Petersburg”. His photographs were used as the title plates for several feature films. At the time Mark also worked with some prominent Leningrad graphic artists on images for commercial usage.

After his forced emigration in 1977 from the USSR and settling in New York City, Mark continued his motion picture photography work, as well as commercial still photography for several clients, including “In Flight” magazine. His portrait work was published by: The New York Times, Newsweek, Playboy, Jerusalem Post, Rutgers Press; NLO; Svinyn and Sons; Knopf; Dodd and Meade and many other publications in the US, Russia and Israel.

As a fine art photographer Mark participated in eight group exhibitions and held five personal exhibitions in New York City, Washington D.C., Connecticut, New Jersey and St. Petersburg, Russia. His shows were featured in the local press and TV, as well as in “The Voice of America” TV show and New York Public Library publications. His show in Connecticut was reviewed in the New London newspaper “Day”, while his St. Petersburg, Russia show “Dreams on Paper” was given a three-page illustrated review in “Na Nevskom” magazine. His Washington DC exhibit was praised by Julie Steiger of Georgetown University, as “…a whole new world…”

Mark Serman’s work can be found in the collections of institutions such as Ilya Repin’s Museum, Fontanny Dom (The Museum of Anna Akhmatova), Pushkinsky Dom – the Institute of Russian Literature in St. Petersburg, Russia and multiple private collections.

His 2014 show: "Looking at the City..." took place at the Museum of Russian Art (MORA) in Jersey City, NJ. The exhibit featured a mixture of Mark Serman's work dedicated to a subject that has been fascinating him for more than 30 years - the city of New York. The choices for this exhibit were also reflected in a 26 page catalog created by the artist.

In 2016 Serman had a personal show which was a part of Sergei Dovlatov  festival in St. Petersburg, Russia. The show was presented in Anna Pavlova Hall at the "Angleterre" hotel, in St. Petersburg.

In the fall/winter 2017 a retrospective exhibit of Serman's works "Urban Poetry - St.Petersburg - New York" took place at the Harriman Institute, Columbia University. Professor Ronald Meyer wrote:"...(it) turned out to be one of the Harriman Institute's most successful exhibits in twenty years that we have been mounting exhibitions..."